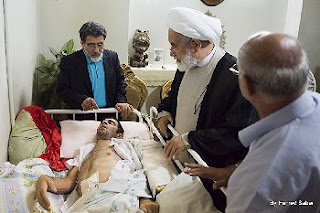 The intrepid seventy two year old Karroubi continues to spill the beans on the post election crimes that have taken place in Iran. Not only has he revealed the systematic rape in Iran's many secret detention centres, he has visited the families of victims and revealed many other human rights abuses by the messianic junta's thugs.

Here, Karroubi is visiting this young injured man in hospital. As the X-ray shows in the bottom picture, the young man's head is littered with pellets and fragments. Doctors have had to remove one eye from its socket already to get rid of the pellet fragments. They only have 10 percent chance of saving his other eye.

Iran's hardliners are calling for Karroubi's head, but the seventy two year old Iranian Lor is not backing down. 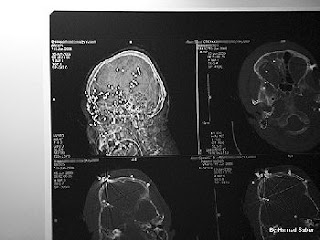 Come on Somayeh (SZ), defend this one; argue that this has no robust grounding, lacks true evidential credibility, or that 'laws are laws' and he got what was coming!

You are pathetic. The true scum secreted from the infected membranes of the devils in power in and outside of Iran!

Nazis, Stalinists and Pol Pot did the same thing to their people. Mullahs are worse when it comes to crimes against their people

Someone with access inside needs to start a meticulous archiving process for each and every one of these vicious crimes: beatings, sexual assaults, acts of torture, and, of course, outright murder. Get the names of the victim, the dates of incidents, the alleged perpetrator(s), etc.

The IRI's henchmen will have pay for the crimes soon.

Just scrolling through the page gives you a real sense of how violent and oppressive this regime is.

I never said Iran was a country that didn't commit any violations of "human rights."

But such is life, its unfortunate that this happened to this young man, I am against it as well. We can only learn from our actions, and I hope our government does the same.

I still support Iran and our government elected by the people of Iran.

@SZ
Ha!!!
Ofcourse, nobody is an angel. Everybody makes mistakes. But the big problem is that your tyrannical government who say they are God, sees these things, like killing of its own poeple, rape, etc.... not as mistakes. In fact for them are these protestors, the Moharebs "who wages war against God". So in their eyes they have right to kill the Moharebs.
And, is 30 years not long enough to learn from the many many mistakes that they made in the past?????

There is such a collection of data ongoing at present.

People should add to the database providing as much detail and evidence as possible.

HA! countries in the world commit mistakes for centuries and many more, and you sit here and talk about 30 years?

It's easy to criticize from your armchair, but its not that simple in real life. Stick to your idealist views and leave the real world to us people in Iran.

@SZ
Real world?! Real Life?! blablabla, In which world do you live except that dark one of your loving Ahmadinejad???? I really do my best(because of my country) and that's why I've chosen for Karroubi. SO.....