More Protests by Iranians in UK

Iranian ex-pats in UK show more initiative in staging protests. Here was a clever way of protesting at BBC Persian which has toned down considerably its Iran coverage.

Right when there was a live broadcast, green helium filled balloons with 'Where is My Vote?" written on them, were let up outside the studio window, in full view of the cameras. The presenter had to announce six times that the balloons and the flag seen suspended outside the window were nothing to do with the BBC. 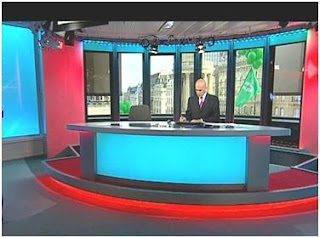 It is rumoured that Ali Kordan, Ahmadinejad's former interior minister who had faked his Oxford PHD, was in UK in the beginning of July to negotiate the release of UK embassy staff in Tehran. Apparently what Kordan wanted in return was for the BBC Persian to tone down its coverage of protests in Iran.


And here are Iranian ex-pats outside the Supreme Leader's representative office in Maida Vale, lighting candles for post election protest martyrs, while a religious festival was being held inside the Islamic Centre of England. 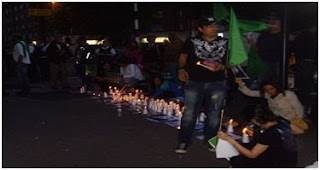 Very nice Potkin. I am proud of you.

I hope that the people continue their shouting from the rooftops. Someone must be brave enough not to cower before these thugs.