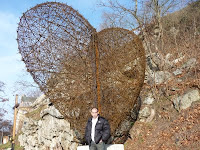 Just came back from a short trip to Slovakia and while I was there also made a trip to Devin, where the heart sculpture by Daniel Brunovský made from barbed wire which originally was used to divide Slovakia from its western neighbour during the Communist rule is located. It was at Devin that the barbed wire was first symbolically cut. 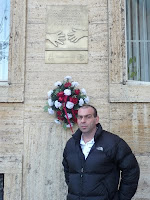 This is by a plaque marking the courage of the Bratislava students in 1989 against the tyranny of Communism outside a university in Bratislava just before boarding the bus to Devin.
Posted by Azarmehr at 8:03 AM

On the topic of tributes to brave students, have you seen this?

Islam is an eternal religion and not some atheistic ideology like communism.

The communists simply gave up.