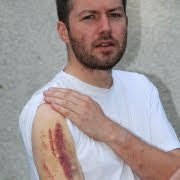 Andreas Moser is a German citizen who was arrested in Iran on 25th June last year. As a tourist he had enjoyed sightseeing in Iran during December/January before the election fraud took place in June. Andreas's tourist visit to Iran developed a kind of affinity towards Iran and its hospitable people. When the protests erupted in June this year, he decided to go back to Iran and see what was going on from a close distance for himself.

The first major disturbance he came across was outside Baharestan Sq., another traditional flashpoint for protests in Tehran where the parliament is situated. This was two days after Neda was murdered, the atmosphere was tense and fear was beginning to prevail again.

Andreas described how out of nowhere a crowd of around 5000 suddenly gathered. Andreas had taken part in many demonstrations in Germany himself for various issues but he described the crowds at Baharestan as the most peaceful protesters he had ever seen. Yet the response by the Special Units was brutal, indiscriminate and over the top. Andreas himself became a victim of the indiscriminate baton wielding Special Units in helmets and armour. The pain of the truncheon blows however soon gave way to a deep sense of rage and resentment. 'Why? for what reason do they beat people up?' was the burning question that did not soothe away. 'This was the most peaceful demonstration I had ever seen. There was no reason for the violence,' Andreas told me.  Yet even if anyone could somehow justify the violence against the protesters, what Andreas could never comprehend was the violence lashed out at ordinary passers by who were not even part of the protest.
'Even women carrying shopping bags and holding their children's hand were not spared' Andreas Moser added. 'And it is that sheer indiscriminate violence that is uniting all Iranians in the struggle. Even the people who voted for Ahmadienjad have now turned against the regime, precisely for that reason'

Andreas was lucky not to be arrested during the Baharestan protests. When he was in Germany he had by pure coincidence met Iranian Human Rights Lawyer, Mohammad Mostafaei on the train and they had exchanged contact details. Andreas had promised to call Mostafaei if he went back to Iran. The day after the Bahrestan protest, was the second time ever Andreas Moser was meeting with Mostafaei, this time in Tehran. Mostafaei had offered to take Andreas to a restaurant. Andreas was sitting in the front of Mostafei's car as a passenger while Mostafei's wife and their six year old daughter were sitting in the back. Andreas was trying to talk to Mostafaei's six year old and joke with her. The whole atmosphere was jovial and fun until a motorbike cut them up and stopped in front of Mostafaei's vehicle. The bike rider had a two way radio. He approached Mostafaei and asked him to confirm his identity and then called on his two way radio and two Nissan patrols turned up from nowhere. Mostafaei was taken away in one vehicle in front of his screaming six year old and worried looking wife. Andreas was blindfolded and taken in the other vehicle. So much for the dinner and the conversation they were all going to enjoy together.

Andreas was taken to Evin prison. He was given prison pyjamas, a blanket, bar of soap and a tooth brush and put in solitary confinement in a 3x3m room with no bed. His cell had a high ceiling and a small window that could not be reached to look out from. Its only use was to tell him if it was day or night. He could hear the prison was full and overcrowded with protest detainees. Some were being kept and interrogated in the corridors. Worst of all was when Andreas could hear other prisoners scream and cry. Their cries went right through him and he felt closer than ever to the pain and sorrow that the people of Iran were going through.

Then the non stop interrogations started. Andreas was interrogated three times a day. He was always blindfolded during his interrogations and he never saw the interpreter but whoever he was spoke German very well, even understood the German colloquial references Andreas used. 'You better start telling us everything or you will remain here for a very long time my friend' was what his interrogator kept telling him. After six days, they realised they had nothing on Andreas. Andreas was called in front of a judge who told him 'You are going to be released. As you can see you were not mistreated. Hope you will not say anything bad when you go back to Germany.' and then the judge finished by the most bemusing statement of all to win over Andreas  'After all we are both Aryans' :)


It was a pleasure meeting Andreas. Every sentence he told me about his plight kept repeating in my head. Perhaps the most poignant one was ' It is the sheer indiscriminate brutality lashed out against everyone which is uniting the people of Iran'. Something Iranian expats should finally realise when it comes to their irrational petty jealousies and small minded traits. Next Saturday 23rd January, is Neda's birthday, lets hope we can display worthy commemorative events for her all over the world. Neda was killed but her death made our nation alive.
Posted by Azarmehr at 12:47 AM

Thanks for posting the Interview. Let's hope that all the needless brutality has indeed turned even Ahmadinejad's supporters against this 'Dark Mullah' regime. What recently brought it more home to me was an email I recently had passed on from someone's sister living in Tehran. Now a young wife. Before the election her family all used to get together in order to cheer themselves up, but now when they meet, they just feel even more depressed! And as a young wife, what of the prospect of her starting of her own family? Well here, I'll simply let her own words speak for her: 'You wish you could have a baby. Your own baby. But you start thinking. And you're afraid. No, not in this hell. Not in this big jail called Iran. Not another prisoner!' So Yes, let's all make a show at celebrating Neda's birthday. So that all future days of birth can indeed take place under truly liberating light.

Done. See? They shouldn't pay all those jackasses on IRIB. I just did their jobs for them.

Thank you for this post. The judge's last sentence just summarises Islamic republic. I wish Andreas best of luck.

I twitted this story...

I have often seen Andreas supporting the demonstrations in London, thank you for letting us hear his story.

I have met Andreas few times too, he is quite descent, well aware and his dedication is an inspiration.

Potkin, thanks for sharing the story.
I have often seen Andreas supporting the demonstrations in London, thank you for letting us hear his story.

Please tell us what happened to the Human Rights Lawyer, Mohammad Mostafaei, his family, their future! Andreas should know better who to meet and who not to meet in Iran. While I share much sympathy for him I see his behavior also as reckless. He surely wants to be published for whatever reason.

Amazing retelling of such an intense event. I always want to hear prison stories because I know that so many stories never surface.