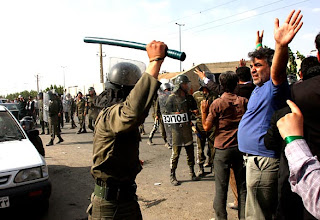 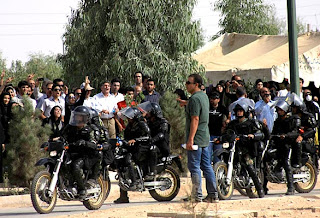 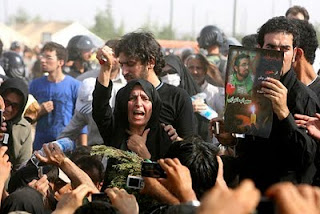 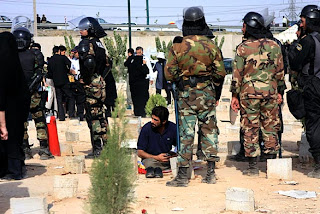 Iranian people will not go quietly into the night.

Demonstrations held in Tehran on Thursday were as powerful and owe inspiring as ever.
Thousands of people gathered in various places across the capital.
Major roads were almost completely blocked by cars sounding their horns, passengers stretching their hands out of the windows showing "V" signs.
In the southern part of Valiasr Avenue where we had gathered, thousands of people who had formed lines on both sides of the road, were shouting slogans such as "Death to the Dictator" and " Freedom, Independence and an Iranian Governance", Azadi, Estghlal, Hokoomate Irani".
As more crowds gathered, they fired a tear gas. As we started to run for cover, people told one another "Don't run, just walk slowly away" while chanting "Natarsim Natarsim, maa hame baa ham hastim","Don't be afraid, we are all united together."
I saw untold bravery of individuals and groups. I saw a solitary figure of a woman walking on her own in between heavy traffic, in full view of henchmen on motor bikes, her hands in the air, shouting "Death to the Government which deceives its own people" "Marg bar in dolate mardom farib".
We moved on to Mosala where the roads below were gridlocked with cars; on the bridge above hundreds gathered with chants of Alaho Akbar etc. The cars below showed solidarity with poeple on the bridge by showing "V" signs and sounding their horns.
As we were heading home, we saw a lone figure of a man in militiary uniform (Niroohaye Entezami) stationed on top of a hill, who answered my "V" sign with one of his own.
There was a tremendous spirit of slidarity and unity. I felt priviledged to be part of it. This movement will not stop; People are already waiting for the next opportunity to go out into the streets.
To the western governments who are continuing to support and engage this illigitimate and terrorist organisation, we say shame on you. To the Iranian organisers of demonstrations outside Iran who are trying to control and tone down the The peoples' slogans, we say shame on you. People inside Iran are showing their hatred of this regime and are willing to lose their lives. They don't want to compromise. Long live Iran: Azadi, Esteghlal, Jomhooriye Irani.