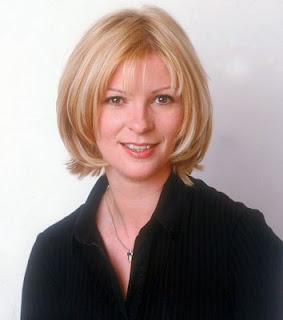 Lauren Booth is the presenter of 'Between The Headlines’ program on Supreme Leader's Press TV. She covers her hair with a scarf on the programs of course.

She is also half-sister of Cherie Blair which makes her sister-in-law of former British prime minister, Tony Blair.

Despite her comfortable life now and having a second home in South of France, Lauren Booth seems to have had a terrible loveless childhood life, where she suffered terrible emotional traumas at the hands of her unloving mother.

In an article printed in the Daily Mail, Lauren Booth revealed why she hates her mother so much and never wants to see her again. She seems to have been a constant victim of her mother's non-stop abusive and humiliating remarks. "Well you wanted her, now you've got her. Good f*****g luck!" was her mother's remarks to her husband on her wedding day. Charming!

When I read Lauren Booth's justification of working for the Supreme Leader, I wondered how much of the abuse she suffered in her childhood contributed towards her twisted warped logic today.

'My program on Press TV is too important for me not to make it' was her comment to the Times reporter.

Is she making up for all those years of childhood humiliation? Does she want to prove to her mother how important she is now? No matter how important or how good her programs are, surely it should matter where they are broadcast from? If a Nazi channel or a porn channel agree to give her air time, would she still feel that her programs are 'so important' that she would present them there too? Does she not realise that the medium she uses can take away the credibility of her programs? Can she be serious about helping any children, when she works for a repressive state that executes minors? especially at a time when that state is involved in such terrible acts of human rights abuses? Does she not think about all those Iranian mothers who do love their children and have had their children taken away from them by this messianic junta that is paying her wages and making her feel 'important'?

Deh-- Of course it is important for her to have her 'SHOW' there ...
Who else would pay for her house in S.France and her 'expences'?

Maybe this "Mouthpiece of the Mullahs" will report on this...It seems that a powerful attorney in Eygpt has demanded in a legal filing the arrest and trial of the evil Ahmadinejad if he should step one foot inside Eygpt:

"In the filing, the embattled president, whose re-election last month has been rocked by street protests throughout the Islamic Republic, was accused of fraudulently winning the elections and insulting two of the Prophet Muhammad’s companions in a campaign speech.

The complaint, filed by Muslim Brotherhood lawyer Mamdouh Ismail, calls for arresting and trying the Iranian president, who is scheduled to attend a summit of the Non-Aligned Movement in the Egyptian Red Sea resort of Sharm al-Sheikh in mid-July.

"Ahmadinejad's visit to the Sinai Peninsula is a threat to national security and he has to be banned from entering the country, and if he does, he has to be arrested and prosecuted," Ismail told Al Arabiya.

She is working double shift!

She is a Fascist attention whore. She wouldn't care about our cause and I think all she deserves is a big kick in her butt.

Now if she would only shut her fucking gob for the mullahs she would be forgiven and even cheered. If she continues to DESTROY DEMOCRACY with her words then...

Booth is a long time supporter of Hamas & Hezbollah and associated fascist groups. She is an enemy of free people everywhere especially the Iranian Democratic Movement. She cultivates close ties with akhounds everywhere.

Her sister Cherie isn't much better. She publicly expressed sympathy for Hamas bombings of Israeli civilians.