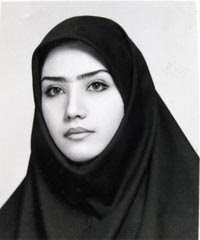 Taraneh Moussavi, was arrested by Baseej forces when Mir Hussein Moussavi supporters turned up at Ghoba Mosque in Tehran, to hear Moussavi speak. Taraneh was held at Hosseineh Ershad until 22:30 along with others who were detained that day. But while others were then transferred to Nowbonyad police station, Taraneh was kept behind by the Baseejis. Her parents search the next day revealed no clues as to where she may have been detained and as a result of all the distress, her father has become ill with heart problems.

Last Wednesday, an anonymous caller called Taraneh's family and said Taraneh is hospitalised in Imam Khomeini hospital, Karaj. The injuries he described her as having suggest, she has been raped. Her family then went to the hospital to enquire about their daughter. They were told a girl similar to Taraneh's descriptions was in the hospital, but she was taken to another unknown location. One of the nurses confirmed that a girl with Taraneh's descriptions was brought in with similar injuries, she was unconscious when she was brought in and unconscious when they removed her.
Posted by Azarmehr at 7:06 AM

Cowardly savages! Hell is too good a place for these demons in human form. When the Iranians take back their country these devils must be routed out and tried for their crimes against the Noble Iranian People!

If tears of compassion and solidarity could move these monstrous villains to look in the mirror and see that it is they who are oppressing the children of God, it would show that the quest for power doesn't corrupt absolutely.

But for those in the West who sit at their computers transfixed by the depravity and hypocrisy of this Basiji's and their paymasters, a feeling of utter helplessness is the only sad result. A feeling that is not even one-half of one-percent of what these courageous Iranian men and women must be grappling with on a very real and daily-basis.

Its so easy for Khamenei to blame it on the British and the United States, but what he can't say is that these Iranian immigrants to our countries are simply trying to engender empathy for their oppressed countrymen.

Justice, free-speech, democracy, multicultural "tolerance" and checks and balances are a gift that Iranian activists from L.A. to London are simply trying to share with their countrymen.

Yet, the terrors they face are all passed off in the name of God (who, ahem, must be personally approving and instructing every last act of rape and indiscriminate shooting by the Basiji and their wicked-brethren).

Excuse the sarcasm, as I am a sincere believer in God. But how "men of the cloth" can get away with such blatant and willfully-deceptive injustice truly boggles the mind (at least the Chinese Government doesn't pretend to have the same religious-clearance).

I just wish the oh-so-balanced media, could show Taraneh and Neda's images every time the cloven-hoofed Ahmandinejad prattles on about standing up for the people (in the service of Providence).

This is the first I've heard of Taraneh's story (as the old-media in America shies away from specifying her treatment, in the name of family-friendly content).

If there's anything an individual, like myself, can do to help these victims, please let me know.

If some of their own families shun them, perhaps these male and female rape-victims have earned a one-way ticket out of that hellhole (until the majority of the clerics in Qom come to their senses and they can return as the living-heroes that they are).

I am not an Iranian, but I would do anything in my power to facilitate their freedom from such double-oppression.

Apparently her burned body was found in west of Tehran.

They are just beast.
no morality, nothing.
I wish we who live inside Iran had
strong media to convey our message to all over the world.
Something like CNN Persian.
That`s a tip of iceberg. There are lot`s of other cases. This is a regime of criminals. Ali Kordan the member of regime before the revelotion was convicted of rapping. He was suppose to became the interior minister for Ahmadinejad. Many people inside Iran do not know about Taraneh case and Persian media haven`t cover that yet on TV and Radio.
If all people know about it,the regime goes under pressure.
Let the world know the brutality of this regime. Or internet conection are limited and under random control. Ask BBC WORLD ,DW-TV,France24,BBC Persian,CNN,CBS,ALjazeera,VOA and VOA Persian to cover that.

I am on holiday in Canada and USA. As soon as I return home I will try to pass on this story about a very beautiful girl who was treated so savagely. Like anonymous, I am not Muslim (I am a Christian). I do believe that Scripture contains some warnings about men who claim to be religious leaders and who oppress their people (Isaiah springs to mind).

This story will get out somehow....