I am told George Galloway, who claimed the protests in Iran are just a fad by rich North Tehran kids, is himself the fifth richest MP in Britain. Yet he is so impressed with Ahmadinejad's "working class" cabinet and their spartan life style :))))

Isn't it amusing how the fifth richest MP in Britain - and that must be some money - gets impressed by such nonsense? Of course Galloway knows this is not true. He is worried about his Press TV pay checks.

For others who may have this misconception, here is a glimpse of the real truth.

The aerial view of the house or shall I say palace of Commander Mahsooli's residence, Ahmadinejad's former oil minister and now the interior minister, in charge of conducting the elections. He made his fortune overnight when he worked with Ahmadinejad, while he was the governor of Ardebil.
Click Here : http://azarmehr.blogspot.com/2005/11/working-class-cabinet.html

And below you can see one of Ahmadinejad's henchmen on the back of a bike with a hand gun. He is in fact no other than Seyyed Hassan Mir Kazemi, head of the Baseej in Al-Haadi mosque in Shams Abad, Tehran, he is also the General Manager of the World of Metal factory in Karaj Highway. The document shows he has received an unsecure loan of 175 Million Dollars for his three factories from the Agricultural Bank and has not returned of the loan so far :)) 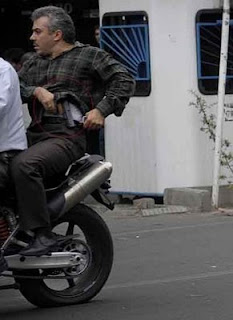 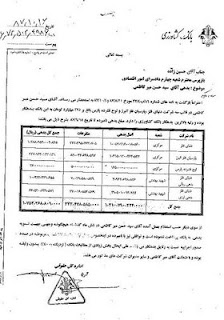 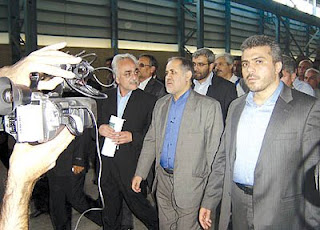 The moral of the story when pampered aristocrats like Haleh Afshar, SWP and Galloway go on about working class values, something fishy is going on :))
Posted by Azarmehr at 3:41 AM

Hi Azarmehr! You should comment on this article about Rafsanjani dreaming of being the next Amir Kabir. It closes with "people want him to be the one to mend this."

this is so appalling thanks for creating the blog

this is utterly without morality

the world never seems to change power and eletism

United States tried to indict vile Galloway for his role in Iraqi oil for food scandals. I wonder if we can try him in a free Iran for his support of the mullahs. I want these bastards to be held responsible at the end of the day.

Tehran’s prosecutor general’s office has said that some armed saboteurs opened fire on civilians and killed people in post-election violence in Tehran.

"A number of Tehrani citizens were shot dead by unknown vandals Saturday night," said the office on Monday.

It said security forces have arrested an armed man involved in Saturday’s riots but rejected reports over the arrest of an armed man whose photo was released by some news agencies.

"Iran’s security and intelligence officials are currently probing into the identity of the individual whose photo was published and broadcast by news agencies," it added.

This is while the situation in Tehran is back to normal for the second consecutive day on Monday. On Saturday, ‘terrorist elements’-who had infiltrated the rallies –created the most violent day of protests by setting fire on a mosque and two gas stations as well as killing a number of people.

Despite warnings by Iranian police, protesters staged illegal rallies in Tehran for several days to cry foul over what they call ‘vote-rigging’ in Iran’s presidential election.

Supporters of the defeated candidate Mir-Hossein Moussavi have held illegal street protests in Tehran and some other cities since the re-election of President Mahmoud Ahmadinejad on June 12.

Presidential contenders Mir-Hossein Moussavi and Mehdi Karroubi reject the result as fraudulent and demand a re-run.

On Saturday, acting Police Chief Brigadier General Ahmad-Reza Radan warned against any illegal gatherings, saying police would firmly deal with any illegal rallies from now on and those who plan such activities would be prosecuted.


Who are we to believe? The Iranian government media or our lying eyes?

Sickened. Disgusted. Horrified... cannot sum up how I'm feeling right now. Indeed, I do not think there is a word for this monstrosity in either English or Farsi.

We know the economical situation of the vast majority of people in Iran and there is no way that the millions showing up are just rich and spoiled North Tehranis.

Life
Liberty
and the
Pursuit of Happiness

- may it come soon for these brave people.

it is obvious that the meme of the left is that "this is rich kids". What I saw amongst the protesters were a lot of very old "rich kids" - like they would be over 60.

Potkin this is nothing new. Marxism, for some unfathomable reason, has always attracted a disproportionate number of well-to-do adherents. Indeed if it wasn't for Engels' money (which supported Marx), Das Kapital might never have been written.

In Iran, most of the founders and early disciples of the Tudeh Party came from 'good' families (most notably Maryam Firooz, the daughter of an uber-wealthy landowner).

I don't quite know the reason for this; maybe it's a guilt thing.

As far as that decrepit nonentity Galloway is concerned, I read the other day that he had been sexually abused a s child.

This may go a long way to explain his pathological hatred of the society he lives in, and the need for wanting to get even, which means going along with any vicious hairy nutter, as long as they promise to maime and kill as many Westerners as possible.