The pictures you see by clicking on the link below: http://www.cloob.com/club/article/show/clubname/t_e/articleid/213900 are the kind of things that could happen to Iranian girls and boys if they are not adhering with the Islamic dress code the government wants to see them in. They could be stopped by the Morality Patrols, either given a verbal warning or taken in the patrol vans to some police station with further grave consequences.

Somehow in the Islamic Republic, these very examples of sloppy hijab and immoral dress codes appear as supporters of the presidential candidates during the Islamic election periods! The picture below shows some of AhmadinejAd's supporters! Scarves pushed as far back as possible, wearing make up, hair colouring etc. and cheering for the very president who rebukes such appearances, after the elections, as manifestations of the enemy's cultural onslaught on the country's national security! 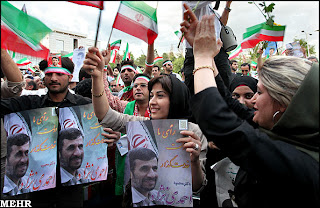 According to the Entekhab Daily printed in Iran, one of these very girls in such a gathering received a big slap across the face from a passer by. Entekhab reporter first remarks on the very short mantoes these girls were wearing while handing out leaflets and posters of Ahamdienjad. Then a young lad walks up to one of them and slaps one hard in the face, saying to them 'My sister's mantou was longer than what you are wearing, but she has just been picked up by a morality patrol round the corner and taken to the police station'

They tolerate these idiots for a few weeks before the elections and once they're done using these morons' votes they will crack down and suppress these morons again. I am really shocked to see this much ignorance among those who live under this tyranny in Iran. Why would they give their support to the criminal akhoonds?

I was shocked to see this too. I thought those manteaus were a symbol of rebellion and love of Western culture. Perhaps these particular women are paid a lot of money to campaign for certain candidates? If so, then they are hypocrites and deserve all that they get.

Came across this blog and think it's really cool.
Just a question: How important are the elections in Iran, does it really matter who is elected, because the ayatolahs are still the same? (in other words, how much power does the elected president wield in Iran?)

You have asked a good question. Fundamentally, no nothing will change. At best there may be some economic ramification and slight relaxation in cracking down on personal life style or vice versa.

The sadest part is that Iran sounds like a beautiful country.

PS, not to complain or anything but why is it that you have to personally confirm coments? It makes these disscutions really slow.
Oh and one other thing, being a westerner I don't really understand the pictures you linked to and what's the problem with them? (I understand the ones shown on this page but the link I don't understan, especially the pictures of men)

Comments are moderated only to stop spams. The link is to the Iranian daily which reported the incident. I put it there not because of the picture but to confirm that I have not made up the story.

well, I didn't understand what's so un-moral about the men there (and some of the women)?

Ok, the first link, after you click on it, scroll down and wait for teh pictures. They show the morality patrols harassing women for not adhering Hejab properly.

The second link is the story in the daily, which shows similar women cheering for Ahmadinejad.

Hope that is clearer now.

thanx for the explanation and for your patience but that's not what I meant. Take the 16th picture in the first link, why is the guy being harassed by the "poliece"?

16th picture, the guy with spikey hair? His hair style is not appropriate for an Islamic state :)

oy vey. That's all I can say.
So what do you take on the results of the LEbanes elections?

Isy, Hopefully its indicative of change in the whole region towards common sense and away from martyrdom and extremism.

A friend of mine told me a taxi driver told him he's actually being paid 50000 toman a day to put up Ahmadinejad's photos in his taxi. He's then told my friend "What would you say to such on offer?" while he'd answered, "What can I say?!" My point is, it's possible it's the same story with these girls, too. After all, anything is possible in Iran, and especially with Ahmadinejad in charge.