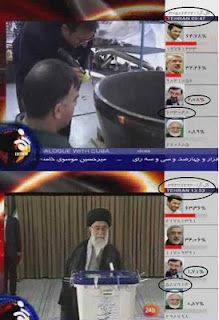 When Ahmadienjad's supporters came on the streets and the regime started threatening the expulsion of foreign journalists, I noticed that the correspondents started getting back to their 'lets not be too critical' mode again. Aljazeera English Tehran correspondent started saying for all we know Ahmadienjad may have won fairly and had more support in provinces and villages. BBC's John Simpson laughed off the protests as nothing substantial that can uproot the Islamic Republic and that there has until now been no tangible evidence of vote rigging. Next day however when 2 million people marched on the streets, 600 were wounded at Tehran university and five killed and at least 7 confirmed deaths in other parts, then they finally heard the sound of the Iranian revolution :)

Here is also a another small tangible evidence of blatant vote rigging. Look at how Rezaii's vote disappears as the results are published live on State TV. Click on the picture to see the figures clearer.

That's not rigging. That's the hand of God, it's "divine assessment!"

Hi Potkin
Both Lindsey Hilsum and John Simpson have made comments which can only be seen as showing support for the Islamic regime. This is at a time when people are being attacked, clubbed, killed or injured.
I'm not sure what more proof they need. Iranian people are paying with their blood every day but obviously this is not enough.

For years they have tried to say the theocracy in Iran is not that bad and it is a legitimate government. Now they dont know what to say and they dont want to get kicked out

Well this is not helping us. Anyway I told her what I think on her blog.