Will Any Freedom Loving Person, Ever buy a Nokia Siemens Again 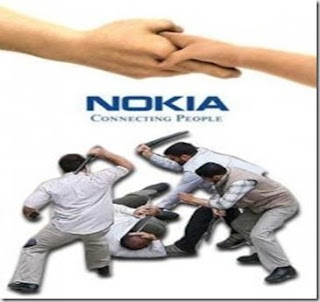 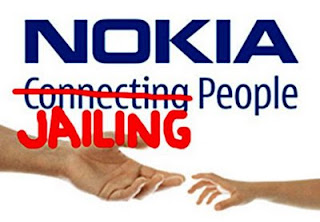 Of course not.... I don't have and never buy one

Mansoor Moaddel writes in a guest editorial for IC:

The current civil uprising in Iran reflects not just a protest against a rigged election. Nor is it primarily a symptom of contentions for power or clashes between opposing perspectives on the nature of the Islamic regime. It is, rather, resistance against a political coup, whose engineers plan to impose a Taliban-style Islamic government on Iran. The coup has been organized by an alliance between the supreme leader and the most militant and fundamentalist faction within the ruling establishment, backed by the Revolutionary Guard.

The political attitudes of one of its most notorious ideologues, Ayatollah Mesbah Yazdi, demonstrates the danger Iranians and the world would be facing should this militant faction get its way. Mesbah Yazdi does not believe in the republican aspects of the Islamic regime, but rather views Islamic law as supreme and must be unquestionably followed. The supreme leader, he says, is not elected but rather discovered by the clerics. For him, Ayatollah Khamenei is the exemplar of such a leader. He has characterized the ideas of representative government and legislative functions as belong to the decadent system of Western liberalism. He has likened reformist ideas to the AIDS virus. He has publically endorsed the construction of a nuclear bomb.

These ideas have much appeal for Ahmadinejad, who claims that the past governments were corrupt and deviated from the Islamic path. Some of the former leaders, people like Rafsanjani and Natiq Nouri, have abandoned the ideals of the revolution. Ahmadinejad argues that for the sake of Islam, such individuals must be sacrificed and the society must be restored to the principles of the Islamic revolution. Under his presidency, be claims, this restoration has been launched, ushering a new beginning for a truly Islamic state in Iran.

Ahmadinejad’s deeds are Islamic extremism in action. He has already restricted the freedom of Iranian citizens, expanded men’s authority over women, increased political persecution, undermined the rights of religious and ethnic minorities, and supported terrorism and political adventurism abroad. He has also recruited members of the Revolutionary Guard to fill key governmental positions and awarded them lucrative government-sponsored projects. These actions, and his administration’s economic mismanagement, promoted the formation of a broad coalition in Iran comprised of reformist politicians, conservative pragmatists, and ordinary citizens representing the majority of the Iranian public.

Realizing the growing strength of this coalition in the run up to the election, the Revolutionary Guard acted to stifle the movement and the ruling party awarded itself a landslide victory – an uncontestable mandate for four more years of growing religious extremism and global isolationism.

The outcome of the current civil uprising is certainly consequential for the development of democracy in Iran. It has also far reaching implications for regional stability, international peace efforts, and the security of the United States. At this point, the regime cannot secure its rule without unleashing a reign of terror. And if this coup succeeds, the regime will forge ahead with its expressed plans for nuclear development and support for religious extremism abroad.
It would be a mistake to think that people like Ahmadinejad are reasonable. It is counter productive to base policy on the untenable premise that he would be amenable to a cost-benefit analysis on the nuclear issue. Time and again he has announced that the nuclear issue is off the table. To believe or hope otherwise would be a profound and resonant error.

The option that is left for the United States is either to effectively support Mousavi’s camp today or risk a military confrontation with Ahmadinejad tomorrow.

Will any freedom loving person ever buy a newspaper again after this revolting piece. 15 secs of fame? When was it ever about fame. People die and get locked up and this doesn't occure to her to write about. Just a jealous poison pen piece on Twitter. The liberal Times made me furious today. Maybe they work for Ahmadi? Im asking people to comment on it via Twitter.

Capitalism without values at its worst.

By the way I wonder what brand cellphone Hanif carries. I wonder if it's Nokia...

Luckily I have an LG mobile phone. I used to own a Nokia. It was like a brick.

Capitalism's only "value" is the market. This is the system you wanted spread around the world, right Sohrab? Well, here are the fruits of your beloved system. YOUR capitalist zealotry is partly responsible for this.

I wonder what Leo Strauss would say about this...

I've never called for completely free markets. I couldn't imagine nor would I want to live in a society governed solely by the rules of the market.

I'm glad to see your views have matured.

Did you just say "freedom loving?" I thought there was an unspoken consensus that that phrase shouldn't be used ever since George Bush left office.

That's not maturation! I've never been a pure free market advocate, never will be. Overall however, I continue to support freer markets as the best way to foster creativity and human excellence.

After all, economic opportunity is one of the things our brothers and sisters in Iran are dying for too.

Plus, you have to remember, just as much as free market systems can allow companies like Nokia to misbehave, they can also allow our Googles, Twitters, and Facebooks to thrive. Each of these have provided our compatriots with indispensable communication tools. And, in the case of Facebook and Twitter, the managements have agreed to reschedule regular maintenance so as not disrupt Iranians' communication among themselves and the rest of the world.

So profits are the only value -- others matter as well.